Our Eurofins Discovery team in Japan presented at the 2021 Japanese Safety Pharmacology Society Annual Meeting, where they had the opportunity to address questions about the BioMAP® Toxicity Signature Analysis (TSA). BioMAP TSA incorporates advanced analytics to assess a compound’s safety in human primary cell-based disease models, and is currently used by large pharma, biotech start-ups, academic labs, and innovative companies globally. Below are answers to the most common questions our Japanese colleagues received.

Why were the nine BioMAP Toxicity Signatures chosen for development?

Development of the Toxicity Signatures (Figure 1) involved comparing profiles of drugs with and without known adverse effects, combining knowledge from clinical data, and data mining the BioMAP Reference Database to test the strength of clinical associations and delineate the underlying mechanisms. Once a toxicity profile signature was identified, the signatures found to be most predictive – there were nine – advanced forward for use in the BioMAP TSA. 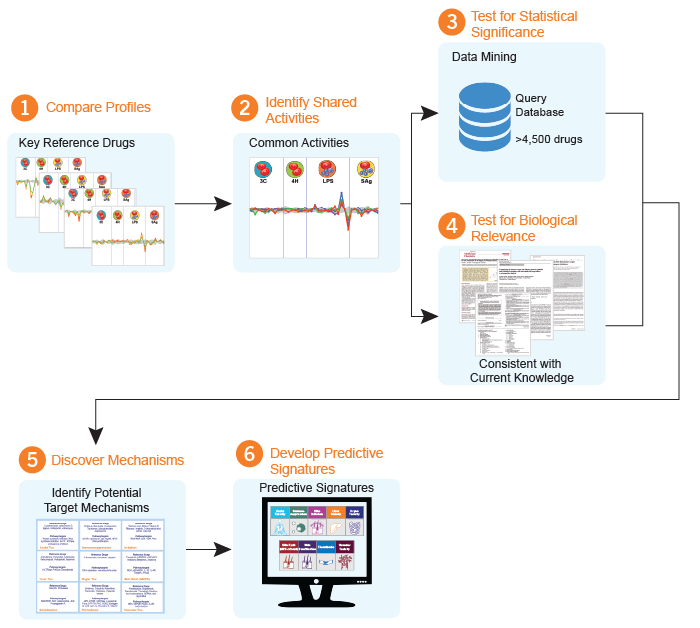 Figure 1. Development of the BioMAP Toxicity Signature Analysis. Advanced analytics provided the basis for development of nine toxicity signatures by comparing profiles in the BioMAP Reference Database (1) and identifying common activities between profiles of drugs with the same reported clinical adverse effects (2). The strength of clinical association was tested by comparing identified biomarker patterns against the larger BioMAP Reference Database (3) to determine consistency of the signatures presence or absence across other drugs with reported adverse effects. Knowledge of shared activities, combined with clinical data and reported literature (4), determined which biomarker activities strongly associated with either positive or negative effects on that particular biology. Identification of biological pathways and targets for each toxicity signature (5) allowed determination of toxicity mechanisms. Key biomarker activities, published clinical outcomes, and tissue relevance of biological pathways combine for predictive value.

Is BioMAP profiling able to detect any toxicities that were either overlooked or not detected with animal models?

We know there is very often a disconnect between animal and human toxicities, which is why we developed BioMAP Toxicity Signatures. See our Frontiers in Big Data Perspective for some of the causes of this disconnect, including lifespan, environment, and physical tissue architecture. Because of the differences between animals and humans, there are human toxicities that are either not detected or not well modeled in animals. Skin rash is one example; we have a case study on this; thrombosis-related side effects and vascular toxicity are also not well modeled in animals. We’ve also seen cases of compounds with liver toxicity that were not detected in animal studies.

Can you explain more about the organ toxicity signature?

As for all toxicity signatures, it is mechanism based, meaning the signature detects the mechanism. The specific organ affected would be dependent on in vivo exposure and ADME-pharmacokinetic (PK) features. Organ toxicity was one of two toxicities identified in an assessment of excipients; this work was published in Science in 2020. In this study, drug excipients, formally classified as inactive ingredients, showed substantial activities on medically relevant targets. Bioactivities of excipients were documented at concentrations reflective of what may exist in patients exposed to multiple medications, supplements, and or personal care products. These observations warrant further examination; BioMAP TSA is perfectly positioned for this type of assessment.

Can BioMAP TSA only evaluate the presence or absence of toxicity risk? What about the concentration level?

BioMAP TSA can give guidance on estimated safety margins; it cannot predict the exposure level in a target tissue in vivo due to ADME-PK features. Our paclitaxel case study demonstrates this.

In order to interpret BioMAP profiles, is it necessary, or best, to identify benchmark compounds as comparators?

This depends on why one chooses profiling or screening using the BioMAP Platform. Benchmarks allow comparison of a compound to a reference compound. If the goal is competitive benchmarking or to identify mechanism of action, comparators are needed. For mechanism of action studies, we do provide a similarity search from the database. If the goal is to identify translational biomarkers as a bridge to in vivo studies, benchmark compounds are not needed.

What is the breakdown of the 4,500 entries in the BioMAP Reference Database (for example, anti-cancer drugs, CNS drugs, small molecules or biologics)?

The BioMAP Reference Database includes approved drugs, failed drugs, biologics, chemicals, nanomaterials, extracts, natural products and experimental agents. Historically, the breakdown in those categories matches fairly well with what one expects from the breakdown of approved drugs. The BioMAP Reference Database is a living database and is continually updated; the recommended benchmarks list available on our website provides some perspective to the database as a whole.

To find out how BioMAP Toxicity Signature Analysis (Item 89-0050-0903) can help improve the success of your discovery or repurposing programs, get in touch with us and include “BioMAP TSA” in your question text. If you find this post useful, let us know that too.