If you’re thinking the end of summer is a good time to catch up on recently published research from scientists leveraging phenotypic screening in their drug development efforts, we agree! Here we share a few examples that demonstrate complementary approaches of in vitro screening and profiling and in vivo models. A wide variety of cancer types are covered in these three publications that each provide a unique perspective on the use of cell-based disease models to advance mechanistic understanding of new compounds that arise during lead optimization or to develop novel genetic screening strategies that inform on the contribution of gene mutational status to therapeutic resistance and sensitivity.

In “Small-Molecule Activators of Protein Phosphatase 2A for the Treatment of Castration-Resistant Prostate Cancer”, Kimberly McClinch and colleagues from the Icahn School of Medicine at Mount Sinai, Case Western Reserve University, University of Virginia School of Medicine, University of Washington School of Medicine, and the Oregon Health and Science University search for new therapeutic approaches to treat metastatic prostate cancer that has become resistant to the standard first treatment approach of androgen hormone depletion and androgen receptor blockade. Their target is protein phosphatase 2A (PP2A), a broadly expressed tumor suppressor that modulates signaling from the androgen receptor (as well as from many other oncogenic signaling proteins) and whose decreased expression or inactivation is associated with poor treatment outcomes. Compounds that activate PP2A, however, are reported to have central nervous system (CNS) toxicity, so McClinch and colleagues utilized structure-activity relationship (SAR) studies to re-engineer small molecule activators of PP2A (SMAPs) for enhanced anticancer potency and decreased CNS toxicity. Eurofins Discovery’s OncoPanel™ Services helped these investigators understand the impact of their original compound TRC-382 across a broad range of human cancer cell lines, including androgen receptor expressing prostate cancer cell lines. See below for their data showing growth inhibition of their tool compound on the diverse cancer types included in the OncoPanel screening and profiling service, and development of additional compounds with improved bioavailability. These figures can be found in the article’s supplementary information. For these investigators, OncoPanel data helped guide the selection of cell lines for additional studies as well as the development of their tumor xenograft model.

Article Supplemental Figures: Use of Phenotypic Screening to Inform SAR Efforts in the Development of Prostate Cancer Therapies. 1. Impact of the small molecule activator of PP2A (SMAP) TRC-382 on growth inhibition in human cancer cell types covered by the OncoPanel platform. 2. Chemical structures of TRC-382 and variants used for in vitro and in vivo studies. SMAP and SMAP-2 have an added hydroxylated linker for improved bioavailability. 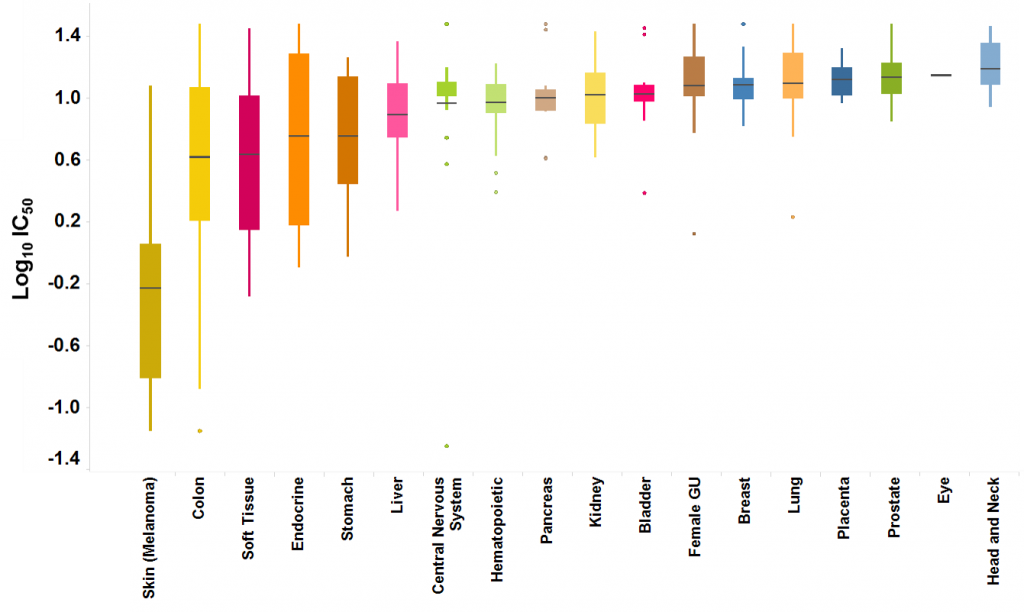 In “Efficacy and Pharmacodynamic Modeling of the BTK Inhibitor Evobrutinib in Autoimmune Disease Models”, Philipp Haselmayer and colleagues from Merck KGaA, Merck Serono, EMD Serono Research and Development Institute, and Eurofins DiscoverX use approaches ranging from in vitro biochemical binding assays and kinase phosphorylation assays, to cell-based phenotypic profiling studies and mouse disease models in work demonstrating the efficacy of a novel Bruton’s tyrosine kinase (BTK) inhibitor on measures of autoimmune disease. BTK is expressed in a wide range of immune cells, with the exception of T cells, and positively regulates biological responses including maturation of antigen-producing B cells, production of cytokines and mediators of inflammation, and phagocytosis. It is a target of interest in autoimmune diseases such as rheumatoid arthritis (RA) and systemic lupus erythematosus (SLE) where antibody-producing B cells contribute to disease progression. In both RA and SLE, however, while the success of B cell depletion as a therapeutic strategy provides key evidence to the role of B cells in disease pathology, success has its limits. Haselmayer and colleagues thus look to the tyrosine kinase inhibitor ibrutinib, approved for the treatment of B cell cancers, as a starting point for characterizing a more highly specific BTK inhibitor appropriate for RA or SLE. Ibrutinib has off-target activities due to its broad range of kinase substrates that present developmental challenges for a therapy designed to treat autoimmune diseases via specific targeting of BTK. Kinase profiling shows a more narrow range of kinases inhibited by evobrutinib compared to ibrutinib; Eurofins Discovery’s BioMAP® Phenotypic Screening and Profiling Service demonstrates evobrutinib’s specific and desired impact on B cell activation compared to the more diverse effect of ibrutinib on a broader range of biological systems (and thereby targets) represented in the BioMAP Diversity PLUS® Panel. The restricted kinase activation and selective cell systems impact provided mechanistic detail to this team’s conclusions based on models of collagen-induced arthritis and IFN-α-induced lupus in mouse studies. 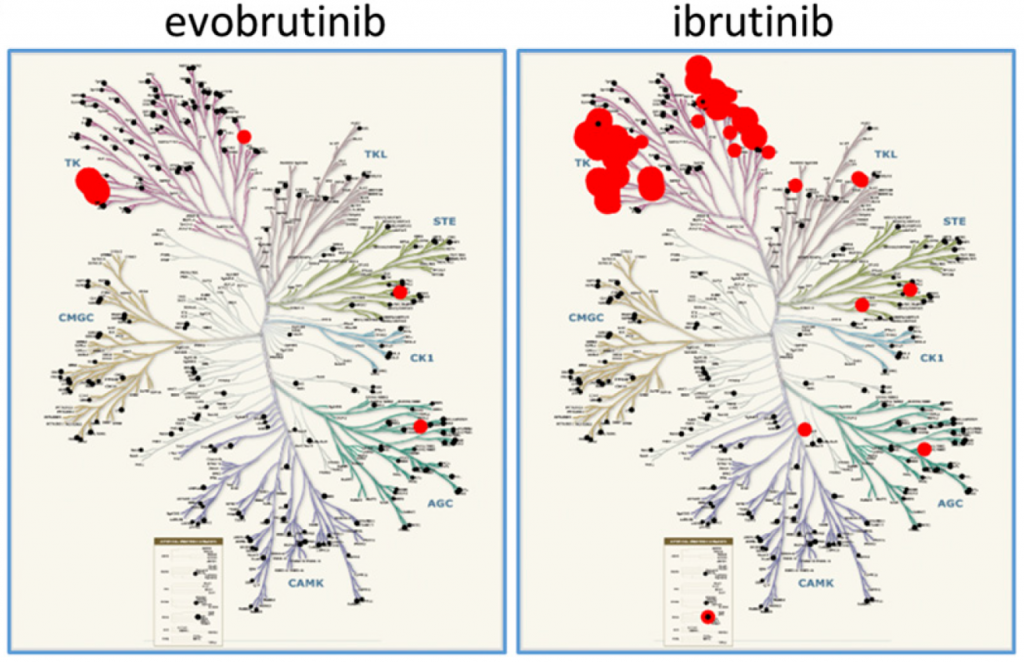 In the final selection, “Predictive Gene Signatures Determine Tumor Sensitivity to MDM2 Inhibition”, Ishizawa and colleagues from the University of Texas MD Anderson Cancer Center, Daiichi Sankyo, and the Department of Medicine, Saga University use in vitro assays, p53 mutation status and drug sensitivity across the broad variety of cancer types available through OncoPanel to identify a gene signature predictive of drug sensitivity. Many cancers initiate as a result of mutations in the tumor suppressor protein, p53. There are, however, other ways to inactivate this important protein, including direct binding to its active domain and induction of degradation through ubiquitination pathway. Ishizawa and colleagues are interested in this latter mechanism of p53 inactivation and focus on a class of therapeutics that restores the tumor-suppressive action of p53 by inhibiting the interaction between p53 and an enzyme involved in ubiquitination, human/mouse double minute 2 (HDM2/MDM2). MDM2 inhibitors are currently in clinical studies for multiple cancer types including solid and hematological, with varying levels of success, thus a need for improved biomarkers or signatures to predict therapeutic sensitivity. Screening for antiproliferative effects of MDM2 inhibitors on OncoPanel cell lines demonstrated that p53 mutation status alone is not sufficient to determine sensitivity or resistance to the antitumor effects of MDM2 inhibition. However, categorizing OncoPanel cell lines as sensitive or resistant allowed screening of the genetic profiles of the cell lines to determine a gene signature profile associated with drug sensitivity and potential efficacy in the clinic. The 175-gene signature was validated in patient-derived xenograft models and 15,000 clinical samples from the Oncomine database and found to provide a positive predictive value as a biomarker for tumor sensitivity to MDM2 inhibition. This team concludes their article with a robust discussion of the caveats of the two gene signatures and the classification algorithms used to develop them. 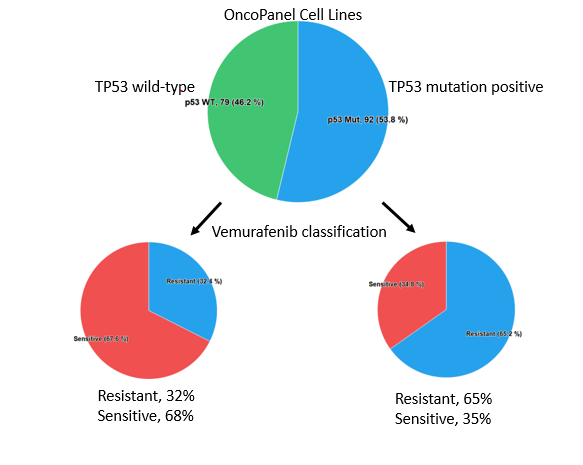 Figure 3. Example p53 Gene (TP53) Mutational Status and Classification of Sensitivity or Resistance to the BRAF Inhibitor Vemurafenib. TP53 mutational status, in combination with gene profiling, contributes to the predictive value of a compound’s antitumor effect. Data are provided as an example and unrelated to the published MDM2 study.

Take a new approach to the end of summer reading list with publications that provide unique perspectives on the complementary use of biochemical assays, human cell-based disease systems, and mouse models; fresh ideas sometimes come from unexpected places.