Therapeutic antibodies that can elicit different applications of cell-mediated cytotoxicity, such as Antibody-Dependent Cell-mediated Cytotoxicity (ADCC) and many other effector mediated functions need to be evaluated early on while in the discovery phase and then in development (Phase I onwards).

Cytotoxicity assays are critical to developing and assessing a therapeutic antibody’s effector-mediated functions. In fact, regulatory agencies require assay data that can reflect the impact of Fc effector-mediated function of antibodies, thereby measuring direct target cell death via ADCC and/ or Antibody Dependent Cellular Phagocytosis (ADCP) rather than measuring via a surrogate or predictive endpoint for antibody engagement of antigen on target cells.

The Eurofins DiscoverX KILR® (Killing Immune-Lysis Reaction) is a novel cytotoxicity assay platform that specifically measures the killing of antigen-expressing target cells in a co-culture with immune effector cells. Based on the proprietary EFC technology (refer to the ‘Applications’ section to learn more about the EFC technology behind the KILR cytotoxicity platform), the KILR cytotoxicity platform provides a simple, dye-free, non-radioactive assay format. This assay format offers significant advantages to the user as compared to the traditional existing cytotoxicity assays that suffer from a less robust, low throughput, dye-based/ radioactive readout that exhibit high background due to high donor-to-donor variability. Refer to Table 1 for a comparison of the features of traditional versus KILR cytotoxicity assays.

KILR Bioassays are Robust and Reproducible in Measuring Direct Cytotoxicity 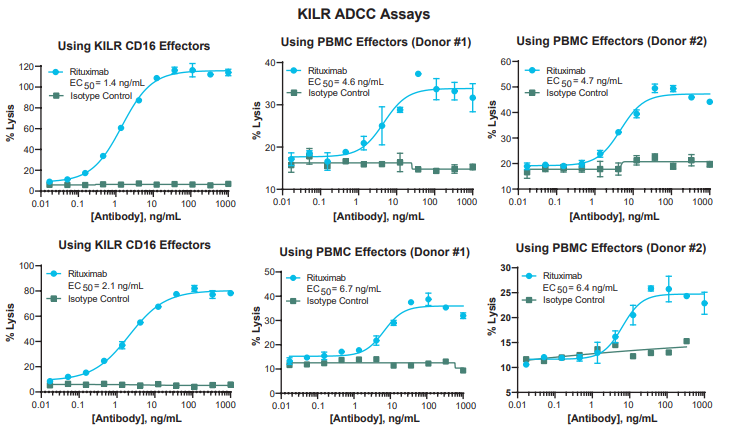 Eurofins DiscoverX describes a simple application of our KILR cytotoxicity assay to measure direct target cell death mediated by ADCC. Traditional ADCC assays use long multistep protocols and present inherent challenges due to variability from effector cells as well as the use of target cells in continuous culture. To minimize variability due to target cells and ensure long-term assay reproducibility, a ready-to-use bioassay kit format has been developed for several well-studied KILR target cell models such as Raji, Daudi, and NCI-N87. These physiologically relevant, robust bioassays are fit-for-purpose for use in screening applications and relative potency testing in lot-release programs. Recently, a case study conducted in collaboration with Abzena, shows the ability of these bioassays to provide a quantitative readout for ADCC, ADCP, and CDC applications that produce large assay windows and excellent reproducibility (key aspects that help accelerate potency testing to QC lot release) when used with KILR CD16 Effector Cells.

Q: Can KILR bioassay cells be used to evaluate killing mechanisms other than ADCC or ADCP?

A: KILR bioassay cells can be used to evaluate other killing mechanisms than ADCC and ADCP, such as CDC and T-cell redirection.

Q: How many assays can be run with a single KILR bioassay kit, and can assays run at higher plate density?

Q. For a release assay, is the use of engineered effectors accepted by regulators, or are primary effectors preferred?

Q. Can this technology be used for analytic evaluation (screen assay) to develop newly engineered antibodies?

A: The KILR ADCC Bioassay Kit can be used to screen antibodies and rank ordering of antibodies.

Q. How well does the CD16 Effector Cells mimic the ‘in vivo’ effector function of the tested antibodies? How has this been tested?

A: Single Donor Derived KILR CD16 Effector Cells are engineered cytotoxic T lymphocytes (CTLs) derived from a single donor that are transfected with CD16 (FcγRIIIa- V158). We have compared the performance of our effectors to ADCC performed with PBMCs and find same rank order and sensitivity to glycosylation and fucosylation of antibodies as PBMCs derived from V158 donors.

Q. Does the KILR target cells have only CD20 expressed or it can be modified with other target proteins as well?

A: KILR Raji cells are B cells, and express a variety of antigens endogenous to B cells, including CD20, CD19 and CD38. They may express others, but we have not characterized them beyond this set. Consult our web site for a list of representative antigens expressed in the different cell models.

Thanks to webinar presenters, Jane Lamerdin, Ph.D, & Erika Kovacs, Ph.D, and for providing insights on questions about the bioassay implementation following the webinar.

Arvind Kannan is a Marketing Manager at Eurofins DiscoverX. He holds a Ph.D. in Cell & Molecular Biology with a focus on anti-cancer peptides from the University of Arkansas. His M.S degree is from Birla Institute of Technology & Science in Medical lab technology, while Bachelors’ in Biochemistry is from the University of Madras, India.